UPDATE: I made another stop by the Cupcake Shoppe, as the new manager graciously offered to provide me some cupcakes in order to give them another try. The shop is generally the same, but I saw many more flavors in the case because this time I stopped by right at opening time, 10AM.

The menu has a wealth of options, as you can see. I brought the cupcakes to some friends at Baldwin& ad agency so we could all taste them. First, the favorites. We liked the Big Red, Coconut, Lemon Zinger and the Carrot Cake. The strawberry icing on the Pretty in Pink was pretty yummy. But overall we felt that many of the cupcakes are plagued with the same problems – dry inside, which the precarious and scrumptious buttercream icing can’t hide.
[portfolio_slideshow]
My favorite cupcakes so far in the area are still Daisycakes in Durham.

This shop seems to be a brand new one on Glenwood. They had balloons outside and a chalkboard advertising Grand Opening. I just happened to be driving by with Glen so we decided to stop in.

The shop had a small selection of cupcakes, including coconut, red velvet, chocolate with chocolate or vanilla butter cream icing, also chocolate with Oreo cream icing and a pumpkin cupcake which is the flavor of the month. There was also other cupcakes which I can’t remember. Each cupcake is $2.75. We each ordered a chocolate cupcake, I had chocolate icing, Glen had peanut butter icing. I’m glad we ordered some milk to have with the cupcakes because they were rather dry. There was what I felt to be an excessive amount of icing. It made the cake difficult to eat because it crumbled all over but there were no forks to scoop up the leftover big crumbs of cake with the remaining swath of icing.

While these of course beat out your average grocery store cupcakes, they’re not quite worth the $ IMHO. However, I do think you should stop and try for yourself – perhaps try one that’s not chocolate. Some people on the chow bulletin boards liked their cupcakes (negative comments seem to be repeated about the chocolate ones), and there was one repeat customer who wandered in asking for a lemon cupcake which was sold out today, so that may be one to try out. Another customer asked for carrot cake, which they also were out of.

Another thing to note, this shop has regular coffee (Larry’s Beans) but no cappuccino or lattes. 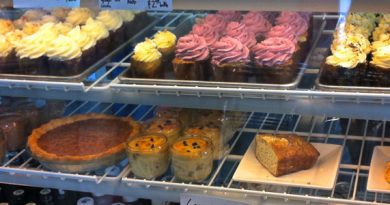 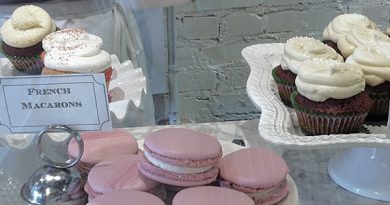