Thinking I was lost, but then forging onwards, I found this unique deli in South Durham (right near 40). I have not really had Polish food much, so I had no idea what to try. I was sure I wanted some fresh sausage, which compliments our long grilling season and hubby’s German heritage. I looked dumbfounded at the meat case, as I usually do when it comes to unfamiliar deli meats. The woman behind the counter was very nice and helped me decide what to get.

I ordered some of the smoked sausage, which smelled fantastic. She picked one out for me that would be good on the grill. I also tried some pierogies and they were quite good, especially if you brown them in a little butter.

Halgo makes deli sandwiches and also sells the meat and sausages by the pound. I’d recommend stopping by if you’re in the area for some pleasant service and quality sausages.
[portfolio_slideshow include=1920,1921,1922] 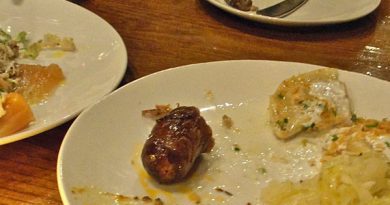