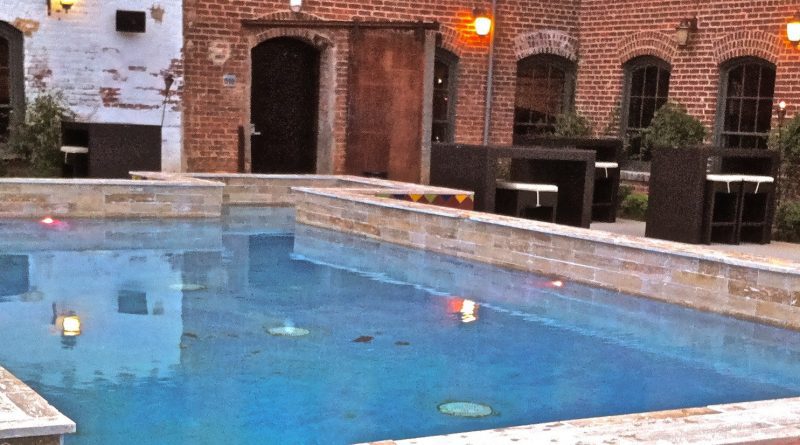 Babylon is a little tricky to find in that it’s right where Capital turns to Dawson and splits off from McDowell as you go south into Raleigh. Take a sharp right and you’re in their private parking lot. How often do you find a private lot like this downtown?

The building had been vacant since it had been a textile factory of some sort, and after extensive renovations, Babylon occupies the front space and the first floor. Our bartender dished how badly she wanted to explore some of the upper floors to see what sort of history (or ghosts?) remained in the building.

The first thing Babylon has going for it is a swanky vibe and a seriously cool decor. You really feel like you just stepped onto South Beach when you walk through the gate to the patio. Cool pools of water and nice wicker seating areas make for a nice location to meet someone for a drink and catch some music. In fact, Babylon regularly has DJs playing for the late night club crowd.

You can see a few examples of the fine mosaic work and marble used in the decor. In the outside bar and especially in the interior, the ceiling of the side gathering room is an amazing piece of art consisting of hand-painted tiles from Morocco.
[portfolio_slideshow include=1863,1874,1875]

But on to the food. My most highly recommended appetizer would be the kefta, which had amazing layers of flavor but was very tender. The spice lovers in the group loved the harissa which came with the various appetizers. We also enjoyed the filo dough appetizers, they were like egg rolls in consistency and shape but filled with a slightly sweet chicken mixture with hints of cinnamon.

Entrees were all generally well-liked aside from mine. Keri had the leg of lamb which she said was the best she had ever had. Glen enjoyed his salmon and mixed veggies. The veal chop was friggin’ huge. Less splendid were the chicken with fries and my meal, the Royal couscous. It had lamb chunks but very little meat and an abundance of chickpeas and raisins and onions. However, we were approached by the owner/manager and he asked us how we enjoyed everything and when I answered “It was ok.” He rushed and brought me back a lamb skewer to make up for it and also dropped the price of our bill.

Even though I am a “foodie” I generally don’t complain about food unless it is unsafe in some way. Especially when exploring a new cuisine, as it all has to do with personal taste. But the way he asked indicated that he really cared about our enjoyment of the meal. I respect that he did what it took to make it right. More restaurant owners should do that!

Babylon would be a wonderful place to bring a date, meet friends for drinks (if they have the cash), or host a private party in one of the rooms.