I’ll admit, this is the first time I have tried chicken and waffles as a combination meal. I know I enjoy chicken, and I certainly love waffles. But would I enjoy them on the same plate at the same time? Apparently the answer is an emphatic yes! The maple syrup drizzled over the chicken and waffle combo is nice, like when you dip your chicken nugget into some honey.

Dame’s has a short menu but everything looks quite interesting. I tried the Quilted Buttercup, a fried chicken cutlet sitting between two sweet potato waffles, with some maple pecan butter for smearing on top. The waffles were pillowy and delectable, and the chicken was crisp and tender with a light breading. 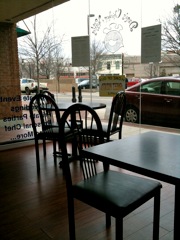 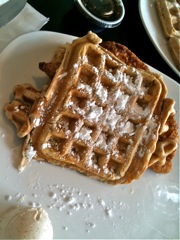 My friend ordered the Frizzled Fowl, a panko-breaded cutlet topped with plum sauce and some almond slivers. She had them put it on top of a sweet potato waffle too, though it comes with a plain one normally.

Each of our entrees also came with our choice of side. We chose macaroni and cheese but could have gotten collard greens or fresh honeydew melon. The mac was homemade but not gluey, some of the best I’ve had, with a great herby cheese flavor. Both meals came with plenty of food.

It looks like other foodie bloggers like MasalaWala, Bull City Food and Girls with Guts also enjoyed this spot. I am so glad that Dame’s is walking distance from where I work. Now the only thing to be concerned about is my waistline! 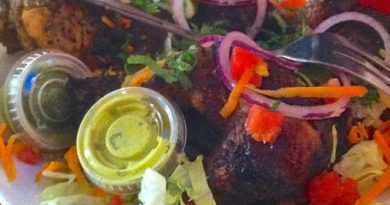 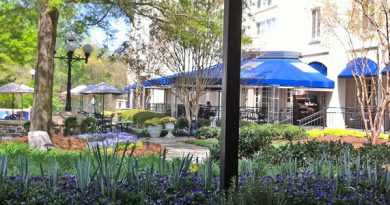