NOTE: This cafe is now known as IRIS, but was previously Blue Ridge Cafe.

Despite rainy weather, I brought hubby and his parents here for a nice brunch before a Sunday afternoon flight. We spent some time wandering among the exhibits before heading downstairs to eat. We were seated right behind the hostess desk, amongst relatively spartan decor in this modern-looking building with picture windows (but not much of a view). An acoustic guitarist with his musical book propped in front of him added to the ambiance, but his covers could have given way to more improvised selections (like at Irregardless).

I ordered an “oak city” – an eggs benedict which involved a sweet potato biscuit, rosemary ham, fried green tomatoes, and a tart hollandaise. The sauce was just as I like it, with a touch of mustard flavor. But unfortunately the combination of ingredients and the sauce overshadowed the delicate flavors of the biscuit and green tomato. For the second half of the meal I ended up extricating the tasty tomato from the mess and eating it separately to better enjoy it. The biscuit really had no sweet potato flavor to it at all. The rosemary potatoes were tasty, however.

If I were to judge my rating based on the experience of the others in my party, it would probably be 4. My father-in-law enjoyed his pear salad with gorgonzola and spiced pecans, my mother-in-law liked her chicken salad of the day, and hubs enjoyed his burger. But the complimentary pumpkin and corn bread which came with our brunches was hard and crunchy, not really edible as if it had spent a good amount of time under a heat lamp. At these prices that is a detail they can’t afford to miss. The orange juice was freshly squeezed, as one would expect.

I would give the Blue Ridge another shot because of it’s unique proximity to the art, but was a bit disappointed during this recent visit. 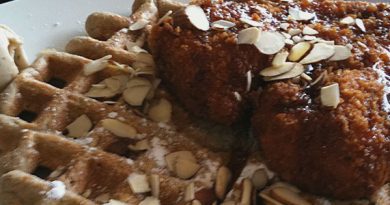