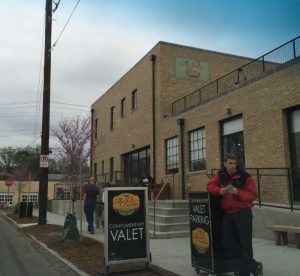 It’s been five years since I’ve been to The Pit, after a meh experience at the one in Raleigh. But I was ready to give The Pit another shot after a home-team winning Bulls game and a thirst to continue my North Carolina day. Strangely enough, I secured reservations on Open Table while we were still in the stands during the 6th inning, adjusted them during the 8th inning, and we found ourselves valet parked and seated at a communal wooden table by 6:15.

Looking to the left you see the cooking grills and chefs right there in an open kitchen. The restaurant packs in the crowds and it can be a bit noisy, but having neighbors nearby just helps you feel right at home.

We ordered the pumpkin cornbread, due to all the foursquare tips, and it was amazing. But the biscuits were also delectable.Â It was hard to remember to save room, and we hadn’t even covered all the apps yet!

We also tried the sampler, and my favorite part of that were the smoked chicken wings. The wings had a lovely smoky flavor and they linger in my memory, golden and gleaming. The bruchetta was interesting, and had a bit of a kick of spice plus goat cheese and basil. Good fried-green tomatoes. And then there were these monster biscuit BLTs.

The biscuit BLT is a mouthful of pimiento cheese, mayo, jowl bacon and biscuit (and L & T, of course). The pimiento was fantastic and so was the bacon, but the combination of all the ingredients led to a very hard-to-eat biscuit and a mushy texture as the biscuit crumbled.

We ordered family-style, and got: chopped pork, sliced shoulder, chopped turkey and carolina-style ribs. Ribs were probably the best I’ve ever had. Amazingly tender and succulent. The shoulder was my favorite, a bit fatty but juicy with nice slices. The chopped pork was spicy for me! Not too dry as it can tend to be, or too moist, but a bit of kick which I am not used to, since I normally forgo the extra sauces. It was yummy to combine a bite of pork with some macaroni and cheese. We also were given some outside brown, which was tasty but very rich. The outside brown is outer crispier pieces from the outside of the meat.

Unfortunately I didn’t get much of the macaroni and cheese, because everyone had some, including my son. It was very good. The baked beans were a sort of combination of kidney and other beans with some cumin type flavoring, as well as a touch of sweetness. Lighter than typical beans on the sugar and sauce. Sweet potato fries were cut with the skin on and a great choice to add in to the mix. Cucumber salad was ok, but the tomatoes were pretty hard.

Because I had to drive home from Durham, I didn’t sample any of the many bourbons or beers. They also had a few wines and some cocktails.

My guests on this day, some relative locals and some from out of town, were reluctant at first to go out for barbecue and also reluctant of The Pit. But we were raving over the food, and pleasantly surprised that we had plenty of amazing food and drinks plus lots of leftovers and paid under $100 before tip for 6 adults and 1 child. That would be about $14 or $15 per adult, including drink. It felt like the perfect way to end a day of baseball after seeing the Durham Bulls in the Tobacco District. Of course, the Pit will have to contend with some competition soon, as their former pitmasterÂ Ed Mitchell is to open a BBQ place called Que right in the diamond view complex at the ballpark soon. 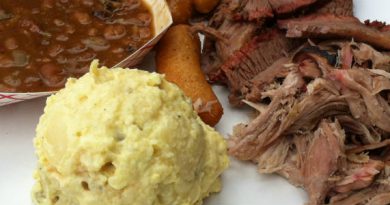 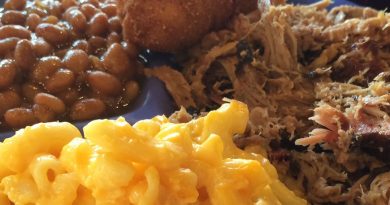 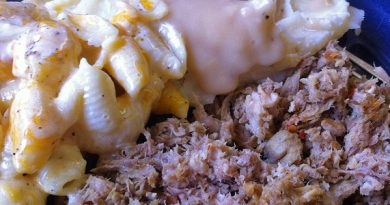