I got to experience Klara’s on a recent jaunt over with some friends who like to try all sorts of types of food. We meet occasionally to sip wine and bite on all types of foods from Ethiopian to Japanese. Czech didn’t seem like it would be all too far from some of the fine German food I’ve had around the Triangle, like J. Betski’s or Cabital Club 16. After all, Germany is neighbors with the Czech Republic (Google Map). But everything was fairly different from anything I’ve had before.

We ordered a few appetizers, the cutting board (an assortment of meat and cheese), fried mozzarella cheese, and the devil’s toast. Fried cheeses you couldn’t go wrong with, especially brie. The cutting board included some bologna, seared kielbasa, and some brie and blue cheese. We enjoyed the kielbasa the most, but some were fans of the bologna. I didn’t like the devil’s toast, which was a mix of bologna and spices and some veggies and cheese over garlic bread.

The Bohemian Roast Beef was underwhelming. It was fairly tough, and completely covered in a creamy tomato sauce. There were dumplings alongside that had a very chewy, steamed consistency. In the pictures the dumplings look like mashed potatoes but they are actually dumplings. But two of my friends ordered the duck, and were very pleased with the succulent bird. Glen had the spicy pork chop and said it was too much horseradish for his taste. The last dish shown is the pork loin.

Given that Klara’s has better wine and appetizers than entrees, I’d recommend this as a spot to have some good drinks and bar food. Klara’s has specials for NC State students, and some tempting-looking cocktails too. The appetizers are decent, especially the kielbasa, which comes out cross-hatched on top and crispy on the outside. You can smell the meatiness wafting across the room as your sausage approaches. 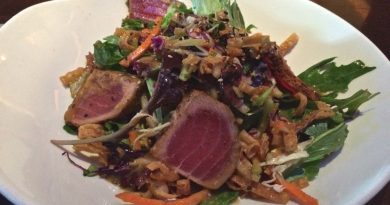