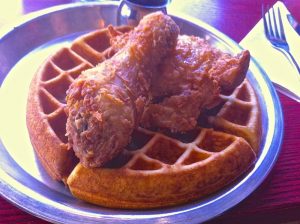 Ever since my love affair with chicken & waffles began (thanks, Dame’s), I’ve been wondering where to find more of this spell-binding combination. I’ve finally made it back to Beasley’s to taste their version of chicken and waffles. The chicken was fine (you’re offered a choice of white or dark, but no boneless option), and the waffle was nice and light and fluffy. But nothing special. Nothing like the decadent, freshly herbed and lightly breaded chicken breasts you can get at Dame’s. Nothing like the homemade flavor of the old-fashioned squishy waffles at Dame’s. And if you want a side, it’ll be another $3.50 on top of the $13 for the entree. The sides are good, but at Dame’s you get a complimentary side of your choice with the meal.

ORIGINAL POST:
If you don’t know about Ashley Christensen already, you might benefit from a primer – read Andrea Weigl’s article “A force of nature.” I won’t go into the deep bio here except to say that she is a local chef celeb, and a James Beard award semifinalist. She’s famous for her good eats at Poole’s Diner and now she’s opened Beasley’s Chicken & Honey, Chuck’s, and Fox Liquor Bar at the corner of Wilmington and Martin streets in Raleigh.

The chicken was fantastic and the sides stood out as well. Dense and fluffy hand-cut biscuits with honey drizzle, orange heirloom tomatoes with buttermilk ranch, tangy potato salad with mustard seeds. If only there was room for dessert. I’m already dreaming about making a late night appearance for the fancy cocktails and waffles with my chicken.
[portfolio_slideshow include=”1823,1824,1825,2474,2472″]
Yes, people, this is not a cheapo place to eat but it’s also not that expensive for the quality. So suck it up and pay the $7.50 for the 1/4 chicken and $3.50 for each side. Give it a shot, it’s yummy.