I apologize in advance for the darkness of these photos. The iPhone can only do so much in a dimly lit restaurant!

You may or may not have heard of Rick Bayless, star of his own PBS cooking show “Mexico – One Plate at a Time”. I had seen him on TV before; he normally spends as much time on the history of the food he shows as the preparation of it. On my recent short trip to Chicago I was lucky enough to get to try his restaurant, Frontera Grill. Frontera does not take reservations generally, so you need to show up early. The food must be good, if we were willing to wait outside in January in Chicago! 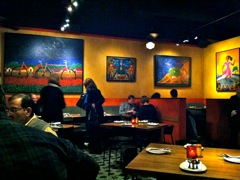 So to start, Rafael and I ordered the queso fundido clasico (which includes chorizo..mm) and tamales de elote. The queso come with homemade corn tortillas, not chips like you might expect. This was a blessing, because the tortillas were so tender and fresh. The queso was scrumptious and the tamales were pillowy and mild, gone before we knew it.

Worry not, I did not leave the drink menu unturned. My blood orange margarita had a dusting of what looked like red chile around the rim. I couldn’t tell if that was it for sure, but it was one of those nicer cocktails I’ve had that was actually worth the premium cost. I couldn’t help but follow it up with a ginger mojito, which had just enough of a ginger bite, tempered by the sugar, mint and lime.

For my entree, I had the carne asada steak. A tame choice compared to many of the options, it let me sample the plantains, black beans, guac, and a juicy steak, all on one plate. The plantains came with sour cream piped on top, which was new for me but it worked together. My companion enjoyed his enchiladas de mole poblano. 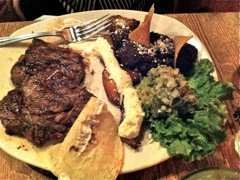 Wasting no time, we tried dessert. A flan duo, one of coconut cream cheese and one of vanilla, topped with mango mint salsa. A slice of chocolate pecan pie. Of course, a cappuccino for me, and for Rafael the chocolate mezcalero. 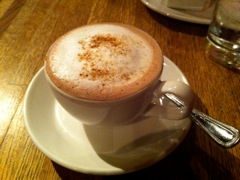 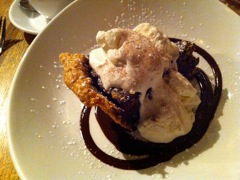 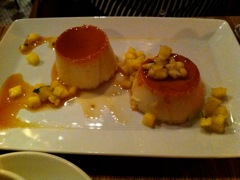