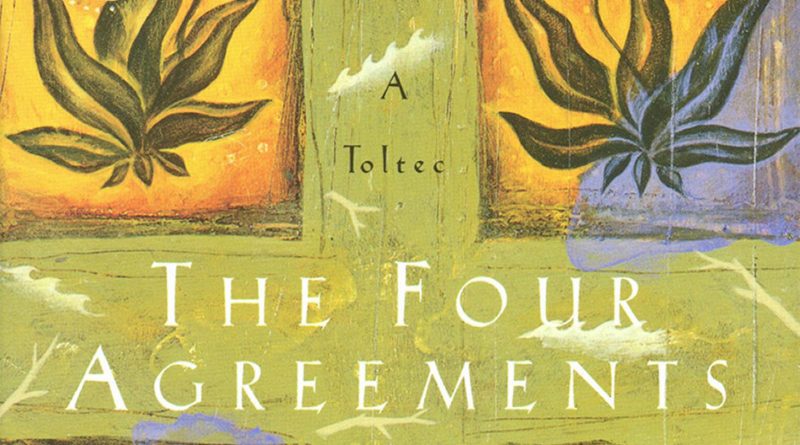 I am a fan of self-help books, partly because they each give a different perspective on how the human mind works and how to optimize it. And partly because I am an endless seeker of information. I read the Four Agreements recently, which was not one of my favorites, but it did have some thought-provoking points.

The author states that these agreements you keep with yourself can help guide you to live a life of integrity and help save you pain. They have been adapted from ancient Toltec wisdom. While the writing style was overly simplistic, some of the tenets stuck with me. The four agreements are:

1. Be impeccable with your word.

“Speak with integrity. Say only what you mean. Avoid using the word to speak against yourself or to gossip about others. Use your power of your word in the direction of truth and love.”

My takeaway from this is that it’s also about being authentic, not using words as a weapon, not spreading gossip and negativity which translates to “poisonous energy.” We should all aspire to spread less negative energy with our words. Sometimes I get very sapped by the negative energy expressed in body language and facial expressions, so being an highly sensitive person has it’s own set of challenges.

“But it is not what I am saying that is hurting you; it is that you have wounds that I touch by what I have said. You are hurting yourself. There is no way I can take this personally.”

This is pretty clear cut advice but for some reason it’s something extremely hard for me to apply. I have an over-indexed, almost empathic ability to understand how people are feeling. But just because I can detect the micro-moods of others does not mean I should take them on. If I detect that someone is saying one thing but seems to mean another, I don’t need to analyze what they said vs. what they might mean. It is their responsibility to be intentional with their words and it’s mine to not take their words or expressions as a personal attack.

Most things people do and say to us are not intended to hit us like arrows at a target, they are actions that have varying causes. We should not project shadow intentions to these actions. Many of our disagreements, irritations and judgements are based on our our mindset about how other’s should or shouldn’t be. Or certain behaviors strike us in places that remind us of ways we have been hurt in the past.

We are such bad communicators that we end up making a lot of assumptions about what other people think and mean. And when we could clear this up with some effort at understanding others’ points of view using respectful listening, we tend to instead create a narrative in our heads. And these stories we tell ourselves may often include ourselves as the protagonist and other people we deal with starring as the evildoer.

Don’t make assumption can also mean don’t spend too much time ruminating about the future. This is certainly a fault of mine. Especially when we feel out of control, it’s tempting to work through every possible thing that could happen. And then gravitate toward negative outcomes and obsess over them.

This is a harder tenet for me to swallow because I have overexerted myself at times in my life, especially after the birth of my son. So it’s possible to do more than your best, in a sense, and then burn out. But the concept is to avoid cheating yourself out of what you deserve because of a lack of motivation or a bad attitude. Don’t cause a situation you will regret later, especially through inaction.

Jordan Petersen also makes this point in his book 12 Rules for Life: An Antidote to Chaos. He discusses it differently, not about doing your best but about working toward making tomorrow slightly better than today was, and working to reduce suffering for yourself and others a little bit more every day. This activity, carried out a little bit day after day, will net you an improved and worthy life over a lifetime, and one that has meaning.

My favorite agreement out of the four is definitely not to take things personally, although hard piece of advice for a recovering people-pleaser to follow.