Located only a few blocks from a number of frou-frou downtown Raleigh yuppie hangouts is the quaint Oakwood Cafe. Don’t get me wrong, I can dig on some local slow food at times. But it’s nice to get away from all that and enjoy a meal prepared by someone’s Argentinian parents. Even if it is in a very basic atmosphere. Perhaps it’s the basic atmosphere that makes you feel so comfortable… you don’t need to impress anybody. 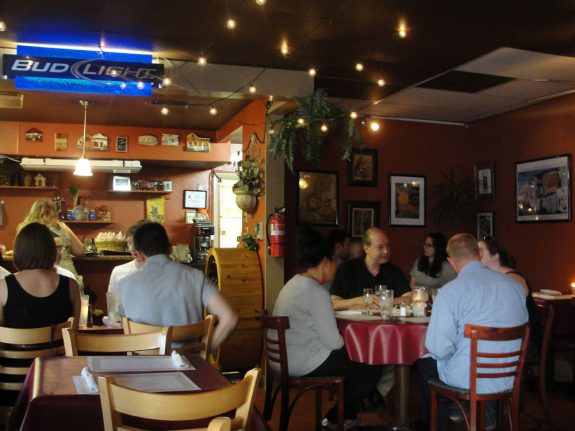 A group of us met for a nice dinner and shared an appetizer of a curly-q sausage with some fries and chimichurri sauce on the side. The fries were pretty standard, I am not sure why they include them with so many dishes. But the sausage was flavorful, just a tad hot, and lovely dipped in the chimichurri. 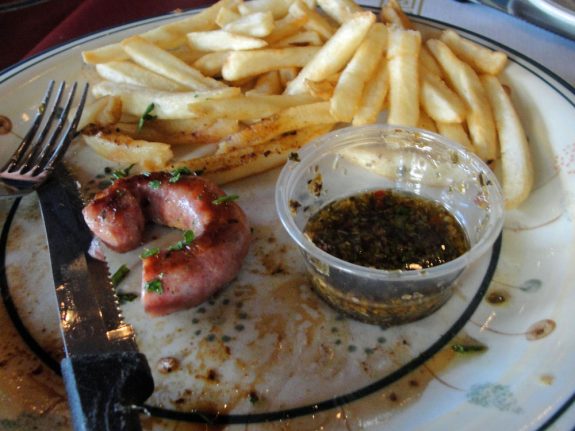 Entrees took a while to arrive but we didn’t mind too much because we were enjoying some wine. I have no idea which specific wines we ordered, but everyone enjoyed theirs. They have a good selection of wines by the glass. I liked my sauvignon blanc and the boys enjoyed some pinot noir. 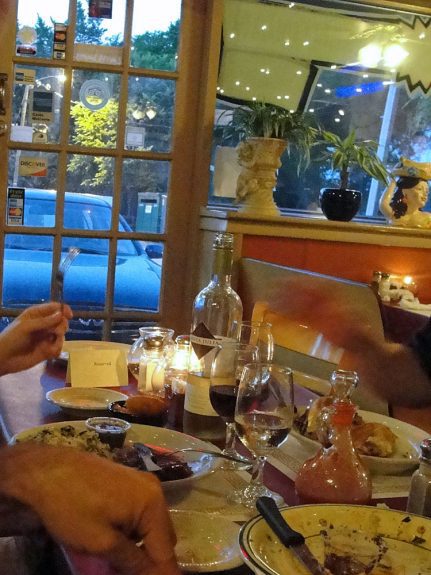 Speaking of wines, after enjoying a few glasses we all must have been in a Latin mood as we started playfully calling each other esÃ©. After doing this a while we decided to look it up because we didn’t know what it meant. We learned, thanks to urban dictionary, that it’s not something we should be saying unless we’re members of a Mexican gang.

Now that we’ve learned our lesson for the day, let’s get back to the food. By far the winning choices here seem to focus more on the Argentinean dishes than the Cuban. Boys enjoyed their churrasco steaks, which seem to be crowd favorites. Most entrees come with a choice of two sides. I chose black beans and plantains with my palomilla steak. The steak was flavorful but thin and stringy. The beans were a bit bland, and I was hoping they would come with rice. Another friend had the pulled pork with mojo, which he seemed to enjoy but neither of these dishes came close to Carmen’s Cuban Cafe. The steak @MrDoydie ordered was a breaded steak with over easy eggs on top. She said it was delicioso! Our friends also enjoyed the home-made hot sauce available at the table.

Apologies for the blurry pics but here are some shots of our entrees. Oakwood Cafe also serves breakfast many days of the week.
[portfolio_slideshow thumbs=true nav=false include=”1586,1587,1588,1589″] 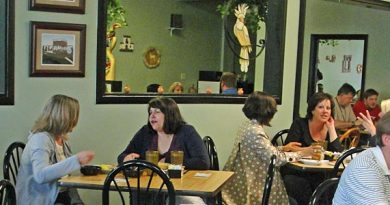 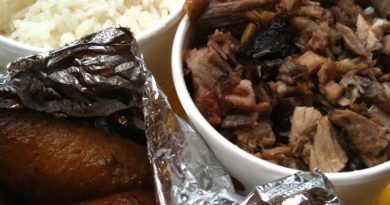 One thought on “Oakwood Cafe”