I hope I’m not the only one that occasionally will cheat on a diet to indulge in a little bit of pizza delivered to my doorstep. An impromptu party or dinner craving doesn’t need to give you an achy belly and fill you with guilt.

I’ve looked at the biggest pizza chains across the country to get an idea of what two slices of thin crust pizza will set you back, calorie-wise. Part of my research involves taste, not just calories, so I referenced The Daily Meal’s “America’s Best 25 Pizza Chains” taste ratings.

Thin crust pizzas almost always have less calories than a standard hand-tossed crust. And we all know that a deep dish or Chicago-style pizza will have the most calories of all. So to compared the pizzas, I used thin crust where possible. One serving of pizza, as I describe here, consists of 2 slices of a medium (12″) thin-crust cheese pizza. I included some take-out pizza chains as well.

The strategy for getting through pizza-time without heaps of regret may be to order a salad, eat some of that first, and then consume 1-2 slices. You are also able to order a lighter portion of cheese in order to cut down on fat and calories from the cheese. Hopefully it’s obvious not to fill up on high calorie soda, breadsticks, and dipping sauces.

One of the most popular pizza chains in the country (and number one on The Daily Meal’s list) is California Pizza Kitchen. I have a problem with their menu because it seems like it would be healthy, given the abundance of thin-crusted pizzas and salad options. But the calories in a “personal-sized” pizzas starts at 1100 calories. So even if you have a half of the the lowest calorie pizza, you’re looking at 500+ calories. Most of the half salads are also over 500 calories. So watch out! I did find a cool blog called Eating Rules that has a two-part series specifically on what to order at CPK. I would recommend the half roasted veggie salad or the half Chinese chicken salad. And get your dressing on the side for dipping. 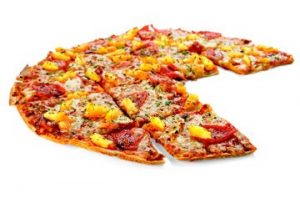 With two slices of medium thin-crust pizza setting you back only 310 calories, and a rating of #2 in the top 25 pizza chains for flavor, Domino’s may be your best option. Other more waistline-friendly topping combos to order are Hawaiian or Veggie, as they describe on their lighter options page. The nutritionals for two slices of a medium thin-crust cheese pizza are: 310 calories, 28g carbs, 16g fat, 2g fiber, 13g protein.

Hungry Howie’s has 30 fewer calories than Domino’s so it’s also a great option for calorie counters at 280 calories, 26g carbs, 14g fat and 12g protein. It doesn’t earn the top spot because Dominos has higher quality and flavor.

Papa John’s doesn’t make a medium sized thin-crust so they lose out a bit, you could have one slice of a thin-crust large but you wouldn’t get as much pizza. They offer you some lighter choices on the menu such as mediterranean, chicken & veggie, chicken and canadian bacon and a tropical luau pizza. 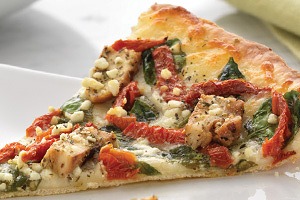 Papa Murphy’s doesn’t offer delivery like most of the competitors do, but they do have a huge variety of pizzas, and rank as #10 out of the top 25 pizza places according to DailyMeal. They also don’t make medium pizzas in the thin-crust size but here I’ve compared to two slices of “Family size” thin crust pizza (1/3 of a 16″ pizza). The nutritionals for two slices are: 390 calories, 36g carbs, 19g fat, 0g fiber, 20g protein. Other lower-calorie pizza options include Veggie, Hawaiian, and Chicken Mediterranean.

Here is the raw data for all the nutritional info I was able to find for basic cheese thin-crust pizza. So you can make your own tradeoffs! 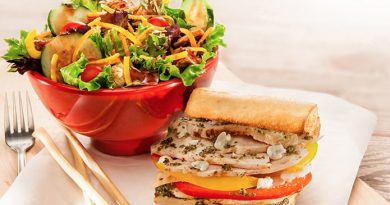 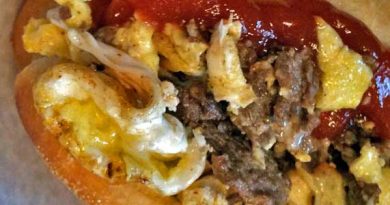 February 16, 2019 deMandy 0
events Featured Raleigh The Triangle Uncategorized what to do